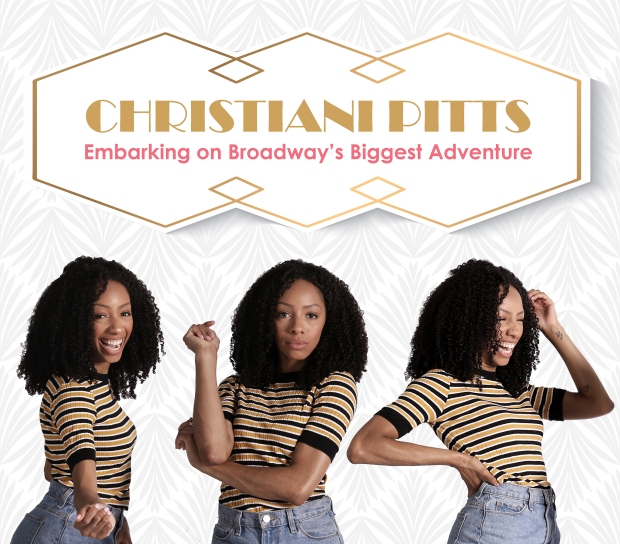 Christiani Pitts is having one heck of a year. Having left A Bronx Tale, the show in which she made her Broadway debut, she’s embarking on the biggest adventure the Concrete Jungle has ever seen, playing Ann Darrow in King Kong on Broadway.

“I think one of the things I learned at A Bronx Tale that I am for sure going to take with me on the journey is that being someone’s ‘leading lady’ is such a wide title,” Pitts explained. “It can be so many different things. For me, that just means being completely compassionate, listening to the people around you and having an open heart. Whereas I used to think it meant being perfect all the time. That’s not what it means. I’ve learned that. You have to be ready to listen to the people around you, help when needed and take the help when you need it. It sets the precedent for the way the group interacts with each other. It starts from the top and works its way down and if the people at the ‘top’ are treating everyone with openness, you see that same openness fill out the space. I’m excited to go into this next journey being incredibly open.”

That journey involves a Kong who, she says, has been on a journey of his own.

“It’s very meta because they put him on a boat and shipped him from Australia to New York City,” Pitts said. “He is an actor, let me tell you. I thought I was going to be acting almost with a green screen but no. Kong’s face is animatronic, it can respond to my touch and sound because there are actors and technicians who are making it happen. It’s so cool.”

Her journey to King Kong began more than a year ago when she first received the audition material.

“I remember getting the material and feeling like I’ve never connected to anything more deeply before in my life; something that I have not created, something that was not mine,” she said. “But, I felt like there was no possible way that where I was in my career and my life that I would actually get it. I had such a freedom going in for it. I knew this was incredible material, I’m having so much fun, I’ll never get this, so I’ll just go in and have a good time. I had an amazing time and then I heard nothing. I thought, alright. As expected. Then, a little under a year later, they called me back in. I asked what I should do differently and they said, ‘Nothing, just come in and trying your best again.’ Same thing. I still felt like there was no way so I’d just go in and have fun.”

When I ask about why she thought there was no way she’d be in the running for the part, Pitts said it was rooted in her own insecurities about who she is as a performer.

“I am my own toughest critic,” she said. “I always feel like there’s something better I could be doing. I think there’s some goodness to that but there’s also something that can be incredibly detrimental. I felt like no one would see me as capable of carrying a show or leading a show. I knew I’ve worked hard enough. I knew I’ve spent enough money on my classes and voice lessons to do it. But something felt like no one would see that in me. Fast forward, I go in and I get the call that they do see that in me and they want me to do it, I was incredibly emotional. One because I was so excited but I was so happy someone saw something in me that I hadn’t yet seen in myself. It blew my mind.”

The character of Ann Darrow has been famously played on screen by Fay Wray, Jessica Lange and Naomi Watts—three blonde, white women—so I felt compelled to ask about the ways Broadway’s Kong story would be inherently different and new because Pitts is neither blonde or white.

“I want to take this back to how much I’ve loved King Kong,” she said. “My first time seeing it was in 2005 with Naomi Watts and Jack Black and I was obsessed with it. I watched it more and more because I loved Naomi Watts’ character but I started to get a bit angry with the way these explorers came to this island and portrayed the people who lived there as savages and ravenous human beings who weren’t good enough to be taken away by King Kong. But all of the sudden, this almost Barbie doll caricature of what an American beauty looked like was perfect for Kong. That confused me. I couldn’t understand what about those other people made them different and not worthy of the king of that jungle. It bothered me. What is American beauty? What is not? What is savage? Those are questions that’ve been embedded into an American tale.”

Pitts says those questions have been responded to in the way writer Jack Thorne has re-explored Kong’s story.

“I am over the moon ecstatic about these people and the brilliant writer that is Jack Thorne taking a story that is lovely, and figuring out ways that we can adjust so that you still get the beauty and the heart of the story but you remove everything that is completely insensitive and inaccurate of what the world actually looks like. That’s what they’re doing with this version. Ann is no longer a caricature of a classic American beauty with no brain, no heart, no soul. Ann is now a fully-fledged woman with different layers of power and insecurity and courage—all the things that make up someone’s mind. She befriends someone who is other, like her. And I think the theme of our story is befriending otherness and not being afraid of it.”

That message of being othered is something close to Pitts’ heart and is something she hopes audiences will relate and respond to amidst the spectacle of the show.

“In all the other versions of King Kong, because Kong is other, their first instinct is to enslave him. I think I’d be foolish if I didn’t make the connection between an animal being put in chains and brought to America and my ancestors who were put in chains and brought to America because they were othered and couldn’t be understood. Our version isn’t shying away from the darkness and ugliness that made it a beautiful American classic. I think it’s going to really knock people’s sock off because they’re coming expecting a spectacle (and they’re going to get it) but they’re also going to get a lesson in the harshness of racism, sexism, and misogyny that they weren’t expecting. It’s brilliant the way Jack has created it. Instead of things happening to Ann, she’s kind of in control of her own destiny and that is powerful.”