James Maslow is all grown up. First introduced to a TV audience of millions as a part of Big Time Rush, the Nickelodeon show about four hockey players turned boy band members, he became one of the four reigning princes of tween TV for the show’s four season run (and a TV movie with an audience of more than 13 million). Not simply confined to the show, the quartet also enjoyed mainstream musical success, releasing three albums and winning both Teen Choice and World Music Awards.

But that was then. Today, he’s focusing on something new: his own music. Last year, he released his first solo album, “How I Like It,” and in the same year, he won the Macy’s iHeartRadio Rising Star competition, something that gave him a platform to perform his new music in front of an all new audience.

“Winning that gave a lot of validity to me going out on my own and doing a solo record. I’ve always been proud of the music but I’ve also had the thoughts of ‘is this good enough’ or ‘does anyone even like this’ in the back of my head. Every artist has those thoughts but winning was really invigorating.”

Fresh off of his win, he released a remix of the title song in early 2018, something he says turned out to be far more than an exercise in revisiting his song—it completely altered the course of how he’s making music.

“The remix is bridging the gap between the old and new. TRIFOR, who is an unbelievable emerging DJ, said he wanted to take a stab at ‘How I Like It.’ When he did, he inspired a whole new sound and together, we then created my new song “Falling.” It’s an all new vibe but it’s the type of music I’ve always loved. So it’s a new vibe, but it’s still all me.”

Much has changed for Maslow since his time in Big Time Rush but the largest shift, he says, has been the space he’s now experiencing to try new things musically—and that includes when things don’t exactly work out.

“The biggest thing is that when you’re with a group, the record label process included a thousand approvals and people making everything look just right. As a solo artist, I’m the final approval on everything and that’s been very liberating,” he said. “I’ve realized not everything needs to be perfect. If one song isn’t the best song ever written, the next one will be better. I work to get better each time.”

With an Instagram feed full of smoldering selfies and a shirtless cover of Men’s Health to boot, the conversation shifts from working on music to working out. But Maslow says the two are far more interconnected than one might think.

“I’m at my best as an artist when I’m not worrying about anything else,” he explains.  “When I’m not in good shape, I beat myself up about it and I focus on that instead. These days, I maintain a good level. I don’t exist at ‘fitness magazine’ level all the time, but close. It gives me better energy, better focus, less stress and allows me as an artist to focus on the music and the creativity, not how I look.” 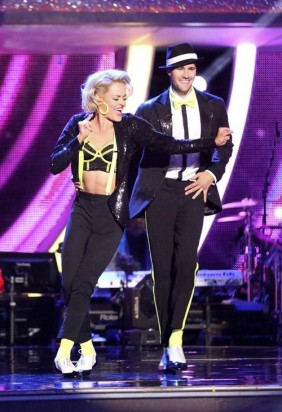 DANCING WITH THE STARS – “Episode 1809” – Emmy Award winning director and choreographer Kenny Ortega made his “Dancing With The Stars” debut as a guest judge on American Icons Night when he sat alongside Len Goodman, Bruno Tonioli and Carrie Ann Inaba, MONDAY, MAY 12 (8:00-10:01 p.m., ET) on the ABC Television Network. The semi-finals began as the five remaining couples arose to the challenge of performing two different routines to music by legendary and modern American Icons. The couples performed a variety of dance styles including Foxtrot, Rumba, Jazz, Viennese Waltz, Quickstep, Samba, Cha Cha, and Jive. (ABC/Adam Taylor) PETA MURGATROYD, JAMES MASLOW

That “artist focus” is something he witnessed first-hand while competing on Dancing with the Stars. More than the applause of millions and adoration from the judges, Maslow says what he really got out of DWTS, he learned from the professional dancers.

“They really are some of the hardest working and often least appreciated people in the industry,” he says of the pros. “They challenged me to push myself that much harder in every aspect of being a performer. Dancers are just so bad ass so after being on that show, anytime I want to complain about something, I catch myself and know I have to push through it like they do.”

Today, he’s pushing himself harder than ever before. With his new single “Falling” out now (and “a lot more music coming,” he says), his stint on Celebrity Big Brother beginning and his film Bachelor Lions out soon, the first few months of 2018 have sped into overdrive for Maslow.

“My drive comes from the idea of being free to do what I want, when I want to do it. I want to get to a level as a musician where I can travel the world and perform in whatever arena I want to. As an actor, I want to be at the point where I can greenlight the projects I want to greenlight. I’m not there yet but I’m working as hard as I can.”