Charles Phoenix has been called the “King of Kitsch,” the “Knight of Nostalgia” and the “Chancellor of Cheese.” Why? His love of the Americana of a bygone era. In his new book, Addicted to Americana, he unfurls the most colorful, most creative, and most interesting facets of mid-twentieth century American culture in a joyful, exuberant way only he can convey. I caught up with Phoenix to talk about the book, Cake Wars, and the source of his seemingly unending joy. 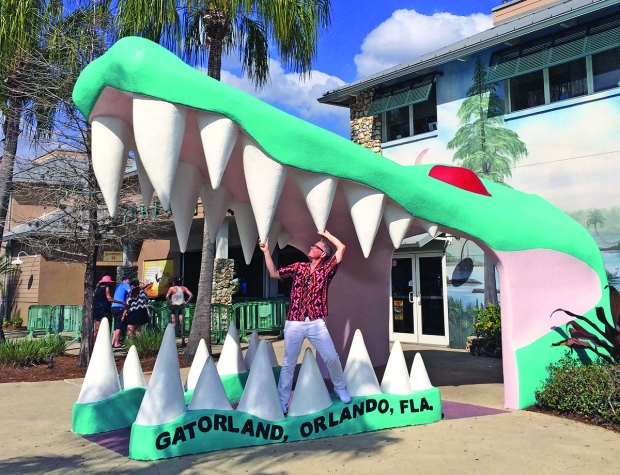 When you were young, what did you want to be when you grew up?

I made up my mind when I was five that I was going to be an artist. I do consider what I do today to be creative so in some ways, I was right. I didn’t know how it was all going to come together, but my earliest childhood beginnings still influence me now. My sensibilities and curatorial efforts are based on the things that influenced me back then.

In 1992, Phoenix was shopping for vintage clothing in a Pasadena thrift store when he came across a shoebox labeled “Trip Across the U.S., 1957.” The box was filled with Kodachrome color slides of an unidentified family’s vacation photos at numerous roadside landmarks. Phoenix began scouring thrift stores, flea markets and estate sales buying boxes of old slides taken from the late 1940s to the early 1970s, amassing a sizable collection of thousands.

Why is preserving and celebrating these slides so important?

I think a lot of greatness has slipped under the radar. There’s a lot of specialness and magic from our culture in the mid-twentieth century era that’s gone unseen. It’s not a surprise some things have slipped through the cracks, but it’s my job to find this stuff and put it on a pedestal. It’s a very interesting period of time, nothing is more interesting to me than the mid-twentieth century culture of America. That’s where I thrive.

Where did the idea for Addicted to Americana come from?

It’s funny, one day I thought, “Gosh, I need something to sell at my shows that’s different than what I’ve been selling for 15 years.” So I decided this was it and in a very quick, roundabout series of circumstances, I reunited with my art director from 15 years ago. I was going to self-publish it but she happened to know a publisher that would be interested and within two and a half days, I had a contract. That’s how it came about.

The book is full of so much from dinosaurs to Disney to The Thing. When you’re making that list of things to include, how do you decide what makes it in?

It’s an editing process of course, but it was based on several things: What images do I have, which stories do I want to tell, and what is going to look good on the page. That’s really how it ended up coming together.

You’ve brought your expertise to shows like Cake Wars Christmas. What’s your favorite part about being a part of shows like that?

I was on Cake Wars for two seasons as a judge and it was a really interesting process. It takes quite an army to produce a show like that and I was in the thick of it all. It was done with military prevision, which was very impressive as well. I was just one spoke in a large wheel, there were so many people involved, but it was a very impressive operation and I think a really entertaining show came out of it.

You come across as a man who loves life. Whether in this book which is so colorful and charming or on television. Where does your joy come from?

I was born a happy person. I was hard-wired to be optimistic and I really live believing that there’s something interesting around every corner. I kinda march to my own drummer, I know exactly what I’m looking for and I’m good at finding it. From timewarps and treasures, I look for the things that are interesting and whose stories deserve to be told. I have a one man live show I do on stage that blends stories from road trips with the vintage slides and it becomes a sort of travel log of then and now. I want this stuff that’s in this book to not go unnoticed. These things are special and deserve their time in the sun. Mid-twentieth century Americana culture is taken for granted and I’m excited for people in the future—people who haven’t even been born yet—to discover it. They’re going to have a field day with this stuff! It’s a colorful and very creative culture in its artistry and engineering.

That’s what I’m asking myself. I have a lot of book signings and some live shows coming up, I was just talking about another book idea last night too, but I really want to do video content. It’s been more challenging than I ever dreamed it would be to get a show together—be it a TV show or a web show—but that’s what I really want to do. I want to turn Addicted to Americana into a TV show.

Head over to www.charlesphoenix.com to get your hands on a copy!