From performing with the biggest names in music like Lady Gaga, Usher and Celine Dion to touring with Cirque du Soliel and working on So You Think You Can Dance and Dancing With the Stars, Teddy Forance is one of the dance industry’s brightest talents. As one of the founding members of Shaping Sound, the Los Angeles based dance company, he’s bringing a new show to a city near you.

What was it that made you initially fall in love with dance?

My mom owns a dance studio with her sister Lisa. I’m a fourth generation dancer, my great grandfather started the studio so it’s been in my blood for four generations. Though my mom never forced me to dance, I fell in love with it at a young age. I started enjoying choreography when I was around nine years old and began making it up all the time in school, at the bus stop, wherever. I was a part of the dance competitions and seeing male dancers who were so strong and cool really inspired me to push myself. We would see each other at competitions, cheer each other on in our performances and so seeing talent like that pushed me.

So at what point did you make the decision to pursue dance vocationally as opposed to it just being a hobby?

I was 12 years old at one of the National competitions. I performed my solo and had this feeling that this was the place I was supposed to be. It felt so natural. I looked at my mom and told her I really wanted to do this and from that point on, it became my everything.

After years of working in the industry, what was the impetus for creating Shaping Sound?

Travis [Wall] asked us to perform with him on Dancing with the Stars and afterward, we went back to his place to watch it on TV. When we saw it air, we asked each other, “How do we do this every day? How do we create what we want to create and control what we put out into the world?” We began trying to figure out how to put together a show, which we did. That show sparked us wanting to build more and we kept pushing from that point.

How does being a part of Shaping Sound challenge you as an artist?

As an artist, especially in this new show, I feel like I’ve grown the most. We did 100 shows of our last show but this new show, After the Curtain, has awakened the acting and deeper performance quality we have inside us. Travis’ creation of the story is very deep. My blood boils in the character I perform every night to the point where I cry on stage. It’s hardcore and I pour my guts out on stage. As an artist, that’s so fulfilling and rewarding. 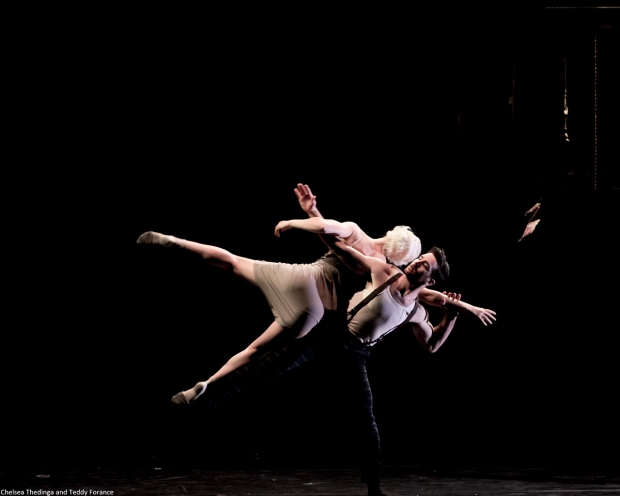 How does it challenge you as a man?

As a man, it’s a day-to-day discovery of how to balance my everyday life, specifically with my wife and child. It’s an intense thing to tour for months at a time, but add to that CLI Studios I run online, and the summer program in Massachusetts I run for a week – it’s a lot of planning out my time and finding balance and how to communicate well with the team. I’m collaborating with strong-minded individuals who I respect and admire every day. I feel honored to be a part of this as a dancer but also as a creator and a business man and a professional.

What sets this new tour apart from the previous works of the group?

It’s gut-wrenchingly intense. I can only imagine what it must be like to sit in the audience and watch it because on stage, it’s so deep. We’re really going for it, we aren’t ourselves. It’s not me and it’s not Travis – it’s our characters up there going through this. Every character in the show is a lead in a sense and everyone has a reason to be there. No one was chosen just because they’re good dancers. Everyone was specifically picked for the show.

It’s also much more in depth and thought out. Our audience who saw the past tour has seen the change and has told us they feel like we’ve stepped it up. I agree with them. The emotional connection we have on stage is clear to the audience. The dancing and music are next level, it’s so much more stylized and mature compared to the last show. I would say this is another ballgame. I love this show. It’s fresh and brand new. It’s allowed a lot of space for us as artists to reach new heights.

For tickets, head over to www.shapingsoundco.com