In his directorial debut,  NYC-based filmmaker Alden Peters documents his own coming-out experience to his friends and family. Coming Out put audiences at the center of the most intimate moments of Alden’s process, allowing people to see this story unfold in a way they never have before. 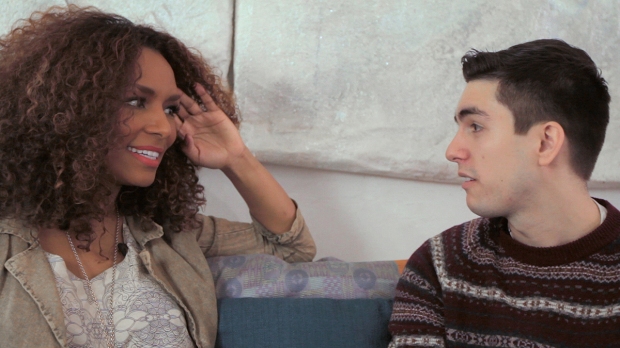 Where did your love of documentaries originate?

My parents recorded me and my siblings with a camcorder as we grew up. A camera was always present and we have boxes and boxes of VHS tapes. I became the designated documentarian of holidays and vacations pretty young. The VHS camcorder was half my size, but I would carry it around on my shoulder confidently. That grew into creating video projects in middle and high school, and then attending film school at NYU Tisch School of the Arts. At film school, I wrote and directed lots of short fiction films, but my list of documentary ideas was always ten times longer. So I’ve always been drawn to documentary. Making a documentary is like carving a marble sculpture, and making a narrative film is like building a house out of bricks. The discovery of sculpting a documentary is thrilling. The breakthroughs are a rush. I love it.

What crafted your skills as a director? How did you learn the ins and outs of making movies?

I directed short films with my siblings and friends since I was a pre-teen, while teaching myself Adobe After Effects from online tutorials. I loved visual effects and creating visual magic. I attended NYU Tisch School of the Arts in their undergraduate film program. There, I was taught and mentored by Oscar-nominated filmmakers and worked alongside some of the most talented young filmmakers in the world. That was combined with an insatiable passion for making films. I look around and I see the world as a potential film shoot, and I’m always thinking about how anything and anyone can be a film subject. My education at NYU is completely responsible for me creating Coming Out. Fundraising, rights clearances, copyright law, distribution strategies–I learned all of that to school and was able to put it into practice.

What made you want to film something so personal?

The first documentary we had to make in film school was a personal film. I hated it. I hated watching myself, I hated showing the film to my classmates. I’m actually a really shy, private person who takes a while to open up to people. I never wanted to be in a film every again. At the same time, I was figuring out how to come out of the closet, and desperately searching for a documentary about coming out. Coming out stories on YouTube were a wonderful start, but I wanted more than summarized stories that spanned years. I wanted to see it all unfold on camera. I realized I had my entire life on tape already, and a family already used to being on camera, so it would be doable for me to film my own coming out. I immediately got a small team together who wouldn’t let me back out of the project because I knew I’d want to stop as soon as the documentation process became too personal. It did, and I wanted to stop. But the team working on the film kept the project going in those moments, and that’s how the film was successful. Making a personal film occurred only because I realized I had access to an intimate story that hadn’t been told in the way I wanted it to be told. The story just happened to be my own.

Subject approval is something that’s clearly important in any documentary process. How did your family and friends respond to the fact that you wanted to broadcast their reactions to such personal news?

I told them they were going to be in the film. I didn’t give them an option, they were going to be part of this project. I don’t think they expected the film to be as big of an undertaking as it ended up being. Everyone including me was interviewed many times over the course of a couple years. It was a lot, especially when we’d see each other only a few days a year and most of those days were long shooting days. And then all the interviews were cut from the film. I didn’t let my parents see the film until it premiered, so they saw it for the first time with an audience. They loved it. They felt how impactful the film was, and how our family sharing our story could help others.

How did you remain objective during the editing process?

There were two editors working on the film, Megan Mancini and Alex Familian. They’re the reason the film isn’t egocentric. Immediately after coming out, I wasn’t able to think of the footage as part of the film. So they sifted through the 20 terabytes of footage we had and started piecing the film together while I focused on producing work for a while. I listened to my editors a lot, and when we disagreed, I trusted their objective perspectives often. That turned out to be the right call.

What has been the most surprising aspect of the process of making your “Coming Out” film?

The success of the film has been the most surprising. This was my first feature film which I started when I was 21 years old. Only in my wildest dreams would it have had such a successful film festival circuit, winning awards around the world, and getting distributed by Wolfe. If you told me this was going to happen before I started the film, I wouldn’t have believed you. The reactions of audiences have also been really amazing. My work is resonating with people, and that’s incredible. When we did our test screenings in New York City, the best feedback I was getting was, “That’s better than I expected.” I thought that’s as good as the film was. Then it started playing in conservative parts of the US and abroad, and it’s been resonating in a way that has surprised me.

What other subjects and topics would you like to delve into?

In addition to LGBTQ subjects, I’m also a huge science fiction geek. I have both an adaptation and an original sci-fi film that I’ve been writing off and on for the last couple years. A script for the original piece should be done in the next year or two.

The next project is a short fiction film called “Femme.” Carson, a twenty-something gay New Yorker, begins a manic existential crisis after a Grindr hookup rejects him for being “too femme.” He ends up on stage at a drag performance publicly confronting his shame in front of a bar full of beautiful yet vapid gays. The film is in preproduction, shooting next spring. “Femme” is one piece of a larger social campaign that facilitates conversations about intersectional issues that affect our community. More info will be available in the next couple months, but for now you can sign up to a mailing list at casaverafilms.com/femme.html

“Coming Out” is available on iTunes, Vimeo On Demand and at http://www.WolfeOnDemand.com