For ten weeks in the late spring, a diverse set of singers from across New York City came together at Rise Bar in Hells Kitchen to compete for the chance to host their own show at the bar and for a cash prize. I had the opportunity to sit on the panel one of the evenings and encourage the performers after their song. It was 90’s night and each performer brought something interesting and dynamic to some of my favorite music. I got to sit down with four of my favorites from the competition, Eric Jetner, Katia Malarsky, Dominic Crossey and Sharisse Francisco, to talk about the competition, the daily grind of being a performer in New York, and the importance of an environment that encourages other performers.

How did you guys first come to the Rising Star competition?

Katia: Marty Thomas does my hair and he posted something ambiguous on Facebook that said something like “I’m doing something exciting, anyone interested in a singing competition?” It was open ended and I texted him and wanted to know what was going on. I haven’t really been performing for a while but I wanted to and it seemed like too perfect an opportunity to not take advantage of it.

Eric: I know one of the girls from Marty’s “Diva” show and she told me I should do it. So here I am.

Dominic: I saw Marty’s post as well but I was encouraged to do it by Marissa Rosen. She said, “Just do it.” So I did.

Sharisse: I wasn’t connected to Marty at all actually. I do a lot of event singing like weddings and one of the guys I met told me I should do it. 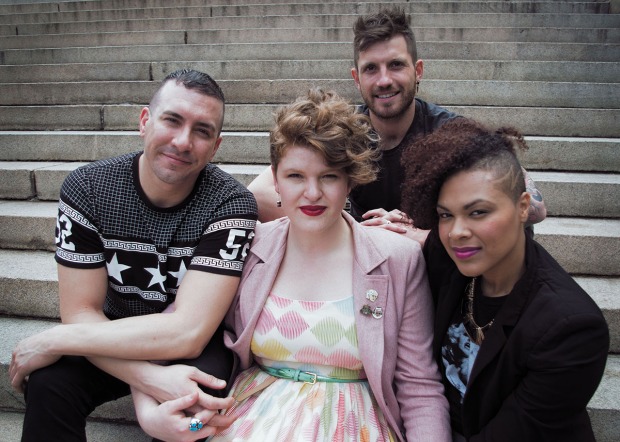 Dominic: It was nice to form a good habit of singing something on a stage each week, getting through the jitters, and the routine of learning the music. Doing that on a weekly basis was a really good habit to get into. Also seeing the different artists that we all are, it’s cool to bond together. It got me thinking about people to collaborate with, sing with and write with.

Sharisse: Especially in competitions, it’s nice to be around people who are extremely talented but are also extremely gracious.

Eric: What Marty is great at is finding people who are amazing artists and who are sweet people as well.

Katia: He really cultivates that community. I haven’t performed in a really long time, I’ve been in a kitchen for the past five years, so I’ve been evaluating what I’m doing creatively. I love my day job but there are days when I will literally wake up singing and since I’ve been too afraid to pursue it, getting that confidence boost has meant a lot. 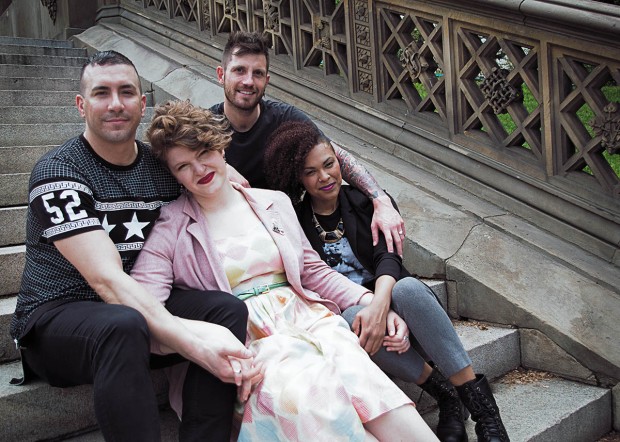 There are countless people in the city trying to make it as performers. What are some of the challenges you’ve come across in your work so far making a name for yourself?

Katia: What was great about this experience was that it was a pre-packaged deal. There’s a theme and that helps you hone in on a song choice. I moved to the city after my undergrad theatre eight years ago, was here for ten months auditioning for Broadway. I was told by literally everyone who saw me, “We are excited about you, come back in 30 years when you hit your type.” I’m a 5’10 mezzo belt and I will be an excellent ‘mother’ character in 30 years. You can only hear that so many times before you get discouraged. I went to pastry school and I’ve been working in restaurants since, which I love. The idea of performing and building a cabaret or backup singing is really exciting but I didn’t know where to start. With this opportunity, there was guidance on what to do next.

Sharisse: Any sort of guidance or mentorship in this field is incredibly important. I’m constantly trying to embrace myself and know that I don’t have to be like the other girls. Especially here in New York, which I always say I have an emotionally abusive relationship with this city. We are here trying to perform but we are so exhausted, so overworked and have all sorts of projects we have to put on the back burner while we go serve at a restaurant or whatever. It’s tough.

Eric: For me it was about being unique. It’s important to not be anyone else. I have to constantly bring who I am to the table. There are so many good people who are trying to make it and you have to stand out.

Dominic: Yes. I think Marty did a good job of steering us each week. He kept stressing to learn your material but he also emphasized the importance of knowing what we are selling as an artist? It hit home early that’s what I needed to do.

Sharisse: The other day I wrote a list of the things I want to manifest in my life. I’m trying to revamp what my goal is as a singer and a performer. When you get to the city, you think you’re going to be Beyonce. But now what’s important is finding what makes you you. I want to continue to connect to other artists and I’m working on my skill as a writer.

Dominic: Since the competition ended, it’s been about keeping the momentum. I had the pleasure of bringing my friend Chris to the stage to play guitar live with me and perform with live music. That’s something I’m integrating into my own show and my writing.

Katia: Yeah it’s about trying to build on that momentum. I was fortunate enough to make it to the final three so I was singing for ten weeks. That really made an impression on me and lit a fire in me to keep going. That was the greatest takeaway.