Wendy Lawrence says she didn’t grow up fascinated with the stars, but that didn’t stop her from becoming a NASA Astronaut with four space shuttle flights under her belt. Now retired, we caught up with Wendy to talk about seeing Earth from space, and something everyone can relate to, never giving up on your dreams.

Growing up, what were you interested in outside of school?

Sports! As far back as I can remember, the sports section has always been the first part of the newspaper that I read. But unfortunately, I’m of a generation that didn’t have many opportunities to play organized sports when I was growing up. In fact, it wasn’t until 5th and 6th grade that I was able to play softball. And it wasn’t until high school that I could actually join a sports team at school.

At what point did you consider astronaut training as a challenge you wanted to take on?

Like many astronauts around my age, we were profoundly affected by the Apollo 11 mission. I was 10 years old at that time. And I still remember watching Neil Armstrong take those first steps on the moon. I was hooked! And that’s when I knew that I wanted to be an astronaut and fly in space when I grew up.

I have to ask. On your first mission into space and you saw the Earth from that far away for the first time, what was your first thought?

It’s very hard to capture in words the range of emotions that you feel the first time you see Earth from space. For me, the overwhelming emotion was the realization that my childhood dream had come true after a 25-year wait. Needless to say, it was a pretty powerful moment in my life!

Apart from your duties on board, did you have to get creative with how you spent your time in space?

On space shuttle missions, we didn’t have much free time. And the little free time that I had, I spent in front of a window looking at our incredibly beautiful planet. I’ve seen both the Northern and Southern Lights; ice floes around the Antarctic ice shelf; typhoons and hurricanes as well as a volcano erupt.

You were the first female Naval Academy graduate to become an astronaut. You were also a member of only the second Naval Academy class that graduated women at all. When you were selected for NASA training, were you aware of how big of an accomplishment that was?

No, not when I was first selected by NASA. I’m more aware of that now, especially when I’m back at the Naval Academy for events and have the opportunity to interact with the midshipmen. I must confess that it still surprises me that many of them know who I am. 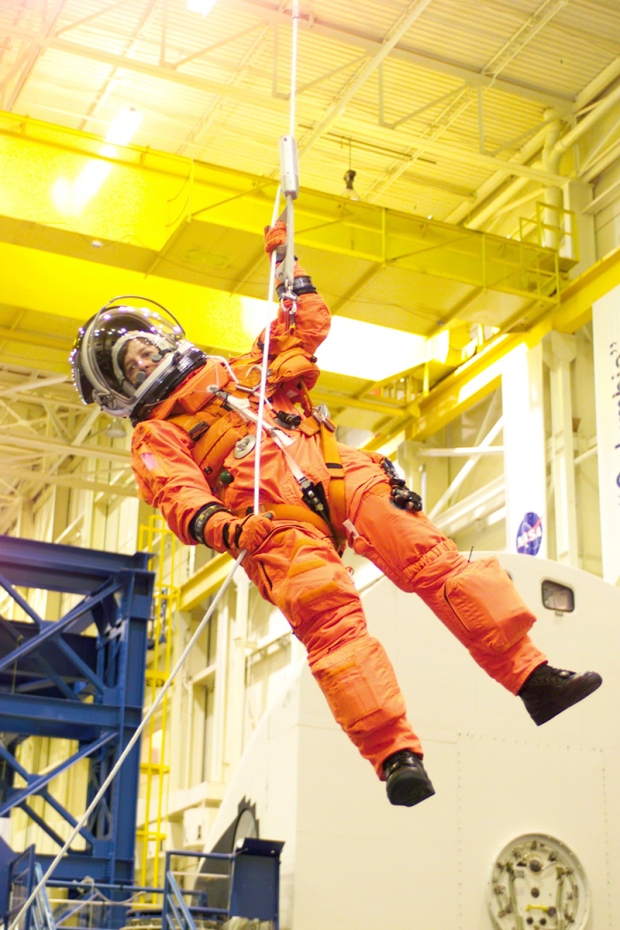 Now that you have retired from NASA, what are you spending your time and talents doing?

Since I retired from NASA in 2006, I’ve had the opportunity to be involved in many different activities. Currently, I work part-time at Space Camp and the Kennedy Space Center Visitor Complex, informing the public about NASA’s spaceflight programs and participating in STEM education programs. Additionally, I’m helping out with the robotics clubs at my local middle school and library. And I also serve on several advisory boards.

Giving back in programs with young people is something you are incredibly passionate about, and you are constantly encouraging students to dare to dream. What fuels that love of inspiring young people?

As someone who was able to make her childhood dream come true, I know firsthand the power of having a dream. Growing up in Southern California during the Vietnam War, I realize that my life could have turned out very differently. But I was hooked by the dream of becoming an astronaut. That dream kept me focused and, more importantly, it kept me in school. So, I know the impact that having a dream can have on your life. That’s why I tell kids to have the courage to dream their dreams and then be willing to pursue it with a lot of hard work.

If you had to give one piece of advice to young girls who are beginning to dream of what their future could be?

Here’s the advice that I do give to young girls who are beginning to think about their future:  Don’t sell yourself short. Don’t keep yourself from doing something just because you think that you might not be good at it. You absolutely owe it to yourself to try. And don’t give up if you aren’t good at something the first time. Just like playing sports or a musical instrument, you have to practice to get better.

To find out more about National Astronaut Day, head over to www.NationalAstronautDay.com and for more on Captain Lawrence, check out www.AstronautWendyLawrence.com