Since Olga Karmansky became the US Rhythmic Gymnastic Champion, she’s worked with Panic at the Disco, been on Broadway in the smash hit Pippin, and most recently took the stage in The Tempest at The Public Theater’s Shakespeare in the Park, starring Jesse Tyler Ferguson and Sam Waterston.  Now, she’s a part of Circo de la Luna and we caught up with her to talk circus, Broadway and speaking  on stage.

When did gymnastics become the thing you knew you were going to do with your life?

I think when I was around 13 or 14 years old, when I made the US National team, I knew. I begged my parents to home school me so I could train more than I already was. I wanted to eat, sleep and breathe gymnastics.

How did your years as a gymnast prepare you for working as a professional in various creative fields?

Having major failures at a young age and huge disappointments that were so heartbreaking to my preteen and teenage mind prepared me. When you’re training your butt off for eight hours a day and then fall victim to politics in a competition or circumstances outside of your control, you come out the other side of it and realize you’re okay at the end of the day. Life does go on and that knowledge set the stage for working in this industry.

You were a part of the Tony Award winning cast of Pippin on Broadway. How did being a part of such a large-scale production challenge you as an artist?

I feel like I’m still reflecting on that whole experience. Working with such a big group of performers with so many different disciplines was different in that a lot of us are soloists in our respective fields. That show wasn’t about a single person having a solo moment. We, as performers, want to show our best selves and a lot of the time, our hardest trick wasn’t going to push the story forward so it wasn’t in the show. Pippin was about collaborating for the greater good and not for yourself. 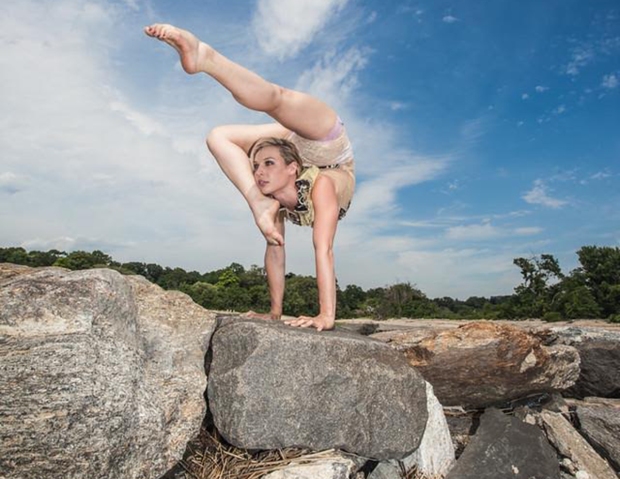 You took the stage with in Central Park with Sam Waterston and Jesse Tyler Ferguson in The Public Theater’s production of The Tempest. How was that experience different than anything you had done before?

It was one of the best experiences I have had and my favorite job so far. I’ve been trying to get more into acting and this was my first speaking role. To be on such a huge stage with so many experienced actors, it was big and important for me. I’ve been trying to make this transition and it’s hard to change your identity as a performer. Having that speaking role showed me that I could do this.

What is getting you excited about the production of Circo de la Luna?

I’m excited to collaborate with Anna. I’ve been watching her from afar for a long time. She has so much more experience than I do and I’m excited to be around her and work with her.

How do you keep things interesting and not business-as-usual?

Every day is different. When I’m not in a production, I’m a freelancer. I’m always teaching and I’m also working on a business, so having outside stimulus beyond performing mixes it up. Even in my social circles, I try to be around people who are not performers. What I do is great and amazing but there are bigger things going on in the world than just what I’m doing. It’s important to keep perspective.

Tickets are available at www.circodelaluna.com for the NYC performance April 21-22.