The Voice is a global hit, and while the numbers for the American version of the show regularly win their time slot, they pale in comparison to the 120 million strong audience of The Voice Arabia, hosted by film star Mohamed Karim. He’s won awards for his work on TV and on film and now, he’s got his eyes on making it in America. More than that though, he wants to bring a global audience to the projects he’s associated with.

I have to start with the fact that you’re incredibly successful in entertainment, but you went to medical school and got your degree. How did you go from wanting to work in medicine to wanting to star in movies?

I grew up in Egypt until I was in high school. That’s when my dad and I made the decision to come to Los Angeles to finish school. Right after school, I got accepted into medical school in Egypt so I went back to go to med school. However, when I was a little kid, I had a passion for acting. I knew then that one day I wanted to be an actor. So, when I went back to Egypt for school, I made a deal with my parents that I would come back to LA each year for the summer.

So were you auditioning in LA when you were there for the summer?

Actually, when my career started, I was in Egypt studying. I began doing movies and TV there, small parts mostly, but that eventually led to getting leads and it took off from there. But even through all of that, winning the Egyptian Cinema Academy Award for my role in “Dokan Shehata,” and now the success of “The Voice,” it’s been my dream to come back to the States and break through here.

Let’s talk about “The Voice.” It’s different than scripted work so what has been so appealing about that to you?

The best thing about “The Voice” is that you’re not playing a character. I’m not playing the good guy or the bad guy. Being the host gives me the ability to show the real me and that’s not a chance a lot of people get.

When I first started my career, I had no one to help me out. I did it all myself and I worked hard. That’s why I love this show. I know what these contestants went through and how hard they work to be seen. Sometimes, I even get angry when the judges don’t turn their chairs around. Since I’m the one who gets to talk to the contestants on the show, I know their stories and I want them all to make it. 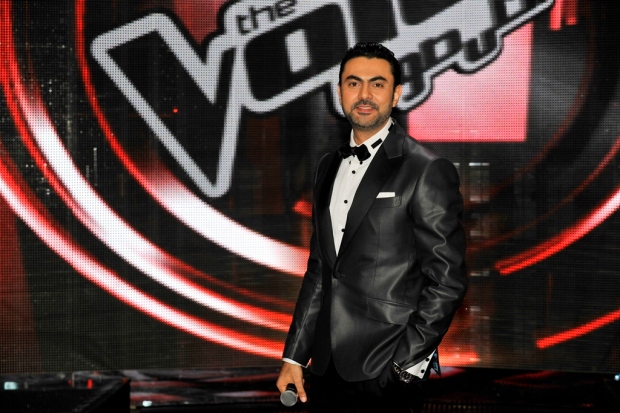 You’re so successful in the Middle East. Why venture to Hollywood?

It’s not an easy thing. I’m willing to come here and start from scratch. When you’re on a show with 120 million viewers and come over here where no one knows you, it’s a big change. But it’s not just about getting work here. It’s a matter of being a part of good projects done by good people. It’s a matter of quality. I want to bring these quality projects back to the enormous audience I have in the Middle East.

I’d never thought about it that way. Rather than doing work on American screens, you want to bring that work back to your audience in the Middle East.

The big studios and production companies are going over to Qatar, Egypt and Dubai to get funding for their films already. What I’m trying to bring to the table is that if you attach an Arab star to these projects, they will get funded.

You’ve made many films in the Middle East and that’s allowed you a platform across many countries. Can you give me an example of a time when one of your films transcended language and cultural barriers?

A movie I was in, “Stolen Kisses,” won me Best Actor at the Alexandria International Film Festival. That film went to 34 different countries and when I was in New York for the screening and Q&A, I figured it would only be people in the audience who knew me from Arab movies and television. But it was a full house and 90 percent of the people there were just New Yorkers who loved to watch new films. It was an Egyptian movie, subtitled in English, and a sold-out American audience loved it.

Now that you’re in the States, what’s next for you?

It’s pilot season and I’m working really hard on some film and TV projects. I’m happy that right now in Hollywood, things are different. Meaning, they are far more accepting of diverse actors. When you look like me, you can play all type of nationalities and those parts are becoming more available now. Things are different.

You mentioned that you’re willing to start from scratch in the States. With that comes a lot of hustle and struggle. What keeps you inspired to stay the course and not give up?

There are a few things that help me out. Since I was little, I kept my eyes on really successful people, those who are self-made. I love their stories and I love movies and TV series’ about people like them. I love to read about business tycoons who had nothing and how they’ve made it through. My dad raised me to go after what I want. I’m stubborn when I get my mind set on something and I don’t let it go. When someone tells me no, I don’t take that as an answer. I continue to go after my goals, focus on the positive and stay away from the negative.