Adina Porter, known to millions of fans as Lettie Mae on HBO’s True Blood is breaking new ground in the upcoming TV drama, Underground. We caught up with The Newsroom alum and current star of CW’s THE 100 to find out about True Blood fandom, being on an Aaron Sorkin show, and how her role in Underground impacted her.

Let’s just start with the big one. You were a fan favorite as Lettie Mae Thornton in True Blood. How did you find that character?

When I first got the role, I remember getting the book, “The Boy Named It.” I wanted to get into the mindset of what rationalization these people gave themselves for being abusive to children. I read that to keep myself in that space. I remember watching Intervention to find how alcoholics carried themselves and I would specifically look at the ones who didn’t have a lot of money and how they found other ways to get high.

Were you aware of how big of a hit the show was?

I’m old-school in that I don’t read reviews. I come from a theatre background and for a long time, I wasn’t aware of how huge True Blood really had become. My scenes were with Rutina Wesley, so I wasn’t around a lot of the other folks. I went in with my lines learned, did my thing and then went. I know now that it was a big hit but I also choose to cocoon myself and not get into all that hype. I think it can mess with one’s head.

What made your time on True Blood different than the other TV shows you’ve been a part of?

Lettie Mae has been the longest character I’ve ever played. That was what made it different than other roles I’ve done. Doing Venus at The Public was more challenging because of it being theatre and it being an avant garde thing. With Lettie Mae, the character changed, so I had to keep her true to who I thought Lettie Mae was and became over seven years. Even though she cleaned up, I always thought, any second now, she cold revert back to her old ways.

The Newsroom presented a different challenge: real life news. What did you learn as an actress being a part of that show?

The Newsroom was definitely a different experience than anything I’ve ever done before. The stakes were always so high all the time. It felt like the entire world was watching and waiting to see what this show was going to be. On top of that, you’re working with Mr. Aaron Sorkin, a perfectionist and a genius. I don’t think anyone, including Miss Jane Fonda, could relax on that set and think they’ve got it. Though I didn’t have the pressure with the monologues, if The Newsroom was a stew, Jeff was the meat, everyone else were the potatoes, and I’m the cumin. Everyone was an important part.

Explain to me what you mean about the pressure of being on that set.

Sorkin talked about the entire experience being like a musical score, so like a musician, you had to know when your cue was and come in at exactly the right time. There was a musicality to his words so if he wrote “can not,” you said “can not” and not “can’t” because you couldn’t mess with the flow. There’s a lot of pressure with that. On that show, there wasn’t really any downtime since there were cameras everywhere and the set was a lot of glass walls where you could see everything happening behind the main scene. So you’re hired not just for that line you’re supposed to say, but also for reacting to everything that’s happening. What I learned was how to work with extreme pressure.

The 100 has been steadily picking up steam and you play a warrior. What do you do to get yourself in the headspace of a warrior?

In Angels in America, many actors did many roles. Kathleen Chalfant, who was in the play, talked about how the shoes were so important and made the difference. You walk different with heels than you do with sneakers and you walk different with boots and sword than without. You can’t help but become a warrior when you’re wearing knee-high boots and carrying a sword. I work out and I stretch so I make sure I’m able to do as many stunts as they allow me to do. There’s a freedom in being on The 100 that you didn’t have on The Newsroom. Here, you get to play. 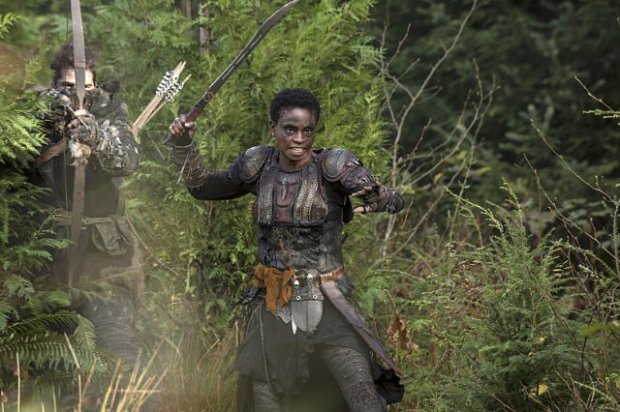 What can you tell us about the upcoming series you are a part of, Underground?

We shot in what were real slave quarters. There is a museum in Baton Rouge about rural life in slave times in that part of the country. They have preserved real slave quarters and we were privileged enough to film there. When you’re in that kind of space, in a space where if the walls could talk…no one on the set complained about the heat, or the mosquitoes, or working however many hours. No one complained. I believe that energy still exists there, and I just want to tell their stories as truthfully as I possibly can.

How did telling that story really sink in and affect you?

I had worked with the director before so in one way, I thought I was just doing another project with Anthony Hemingway. But because of being African American, being a mother, and being a human being, I was sitting in a shack and looking at the walls, not knowing what the marks on the wall meant. They could have been a secret reading lesson, they could have been the bales of cotton picked, they could have been how many days since they’d last seen their loved ones. It was a labor of love to tell this story and tell it from the perspective of these victims. Even if you were a white slave owner and you had to turn off your humanity to pay your bills to turn this person into a property, you lose your humanity. They lost something too.

What was something you took away from the experience making Underground that surprised you?

What guts it took for these people to leave the life they knew! I had to ask myself if I would have run. What kind of person would I have been? Would I have chosen to be free? Underground went to Comic Con because these people are being portrayed as if they are superheroes. I thought of it more as The Great Escape than a slave narrative. Yet again, I feel so incredibly privileged to be on the other side, to tell the story and I’m very proud of it.

When you look at what you’ve been a part of so far in your years in the industry, what comes to mind?

I am just so incredibly grateful to be a working actor and I’m glad I’m not like actors who have been on a show for a certain amount of time and think they should just get offers and not have to audition. I auditioned for everything. The Newsroom and The 100 were on tape and sometimes I can’t believe the life that’s been created for me from being in a room for five minutes with a camera. In True Blood, Lettie Mae was only supposed to be in eight episodes and was supposed to die, but they liked what I did and they kept bringing me back. You just never know.

All three of those shows have rabid fan bases. What is it like to be a part of something that extends beyond the TV and into cosplay and fan sites?

It’s really special to be part of shows that have a life of their own. Because of the way we now watch TV, we binge on our own timetables, so there are people who are just now getting into True Blood or The 100. I was listening to Maggie Smith on NPR today and they were reading reviews from one of her first Broadway plays which noted how she was such a “dish.” She said, “I was never a dish and thank God I wasn’t a dish. That pigeon holes you. When you’re a character actor, you have longevity.” I remember not liking when people referred to me as a character actor. I felt like character actors were the chubby, unattractive ones and you wanted to be a “star.” But for me, I very much enjoy being an actor and to still be working and reinventing myself.