We caught up with Italian performer Rita Lynch during the first part of her first US tour, performing at the New York Burlesque Festival. Known for her mastery of the variety show, she’s passionate about bringing her art and the varied artistry of her colleagues to Italian audiences.

How do you describe yourself as a performer?

I am Italian and I try to show the best of Italian art in what I do. I’m here in the US as a burlesque performer, performing in the New York Burlesque Festival and then a tour after that. In Italy, I am an actress. I work in TV and films. I’m a variety performer, so what I like is giving something different.

Where does your love of burlesque come from?

There is the musical, the drama, and the comedy but I like the variety. I think the variety is the most complete show in the world because you can see singing and dancing like a musical, but you can also see circus acts and drama. In America, burlesque is a certain way. American burlesque is much-more stripping. What I do mixes everything in my background into my burlesque. I want to show everything I know how to do.

When did you first start performing burlesque?

Five years ago. I started as a pin-up model but I have a different type of body than a normal model. I’m not as tall and my face is particular. In Italy, a pin-up model isn’t as known as it would be in America. We have the diva of the variety but it’s not like the diva in Hollywood. I want to show another type of modeling or diva. I saw a TV program, Lady Burlesque, and it was the first reality show about burlesque. I auditioned and they cast me for the second season. It was a very fast way to become a performer. In TV, everything is fast. You don’t have time to think.

How did you transition out of being on TV and back into stage work?

After the TV program, I started to work on my character. I had to figure out who Rita was apart from the TV show. ‘Lynch,’ her last name, came from David Lynch, the director. ‘Rita’ is a character in Mulholland Drive, the alter ego of the main character. That’s who Rita is for me, my alter ego. I wear vintage clothes and watch vintage films, but I don’t walk around with glitter and fake eyelashes every day. Rita is the most eccentric me on the stage.

Do you think what you do on stage with burlesque transcends language barriers?

Yes. It’s easy in a way – you don’t have to speak. It’s easy to communicate in every country. In another way, you have to be more expressive and give everything to the audience, because you aren’t speaking. If you aren’t expressive, they won’t understand. In school, I learned to be expressive with my body. If you feel something, you feel it in all of your body, not just in your face or your hands. 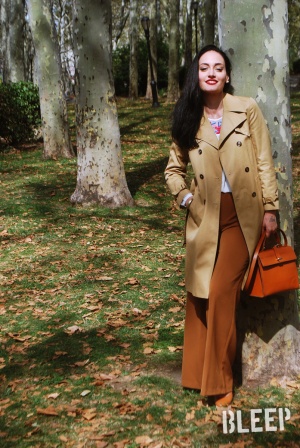 What is coming up for you?

It’s a very intense period of work. After finishing my tour from New York, Los Angeles, San Francisco and Montreal, I come back to Italy and in December is the debut of my new show. I wrote it from the first line to the last and I think it’s the biggest work of life. It’s called Red House, a variety with eight people on stage and I tried to mix together all forms of art. It’s a mix of Cabaret and Victor Victoria.

In your opinion, what is the current state of burlesque in Italy?

In order to do variety well, you have to study the art of the variety show. It would be easy if you did a TV show like Big Brother, then maybe you could do a theatre show and make a lot of money because people want to see the person from a TV show. But that does not make you an actor. Our country is so full of history and culture, but if you go to Rome, many theaters are closing. I do everything with all of my heart and my company is made up of young actors who do good work. I don’t want to put someone from a TV show in there just to have their name on a flyer.

You’re performing all over the world now. What keeps your grounded in Italy beyond it being where you’re from?

I work a lot outside of Italy. I did four months in Germany for a show this year, and I’ve seen big theaters full of people seeing variety there. I’m here in the US now, I will be in Japan next year. People all over the world want to see this type of art, so I want to try to bring that to my country as well.  I believe in this show and my company. It’s why I stay in Italy.

For more on Rita and her show Red House, head over to Facebook!