As one of the founding fathers of 2 Ring Circus, Ben Franklin brings what he describes as “comedy burlesque with an acrobatic twist” to the stage with 2 Ring and once a month at Boys Night at The Slipper Room in New York City. We caught up with the high-flying, hula-hooping star. 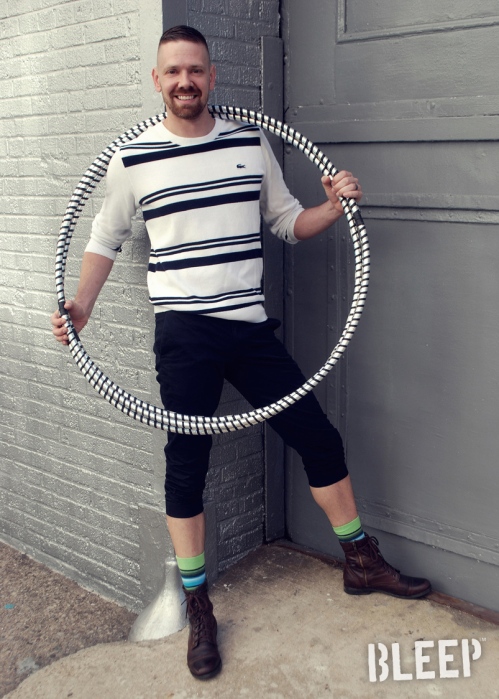 How did you become a burlesque performer?

I was dragged into by my husband. It began by being a theatre performer then it progressed to becoming a circus artist and then he suggested I should do an act, but do it burlesque. He’s sorta my Momma Rose.

How has your success pushed you to transform as an artist?

Since I go by my real name as my stage name, he’s kinda become this crazy, slightly dangerous character, even though it’s completely innocent and comedically based. He’s the side of me that’s totally not my regular self, who I let come out and use the skills I keep gaining circus-wise while combining that with my theatrical training. I like to come up with a new situation to put him into where he has to do an act and take his clothes off at the same time. He goes on stage to do that, then I put him away.

It comes with getting older and getting more comfortable with who I am. I had a long journey from small town Virginia and the conservative Southern Baptist upbringing. This was never on my radar. But it’s been the most freeing thing. I’ve always been a late-bloomer, I’ve had body image issues in my head and more than anything, this has totally let me throw that out the window. I don’t really care anymore. All I want to do it go out, act like a fool and make people laugh. If it happens by spinning hula hoops and throwing my clothes off at the same time – then that works.

Boys Night is different than other burlesque shows in that it combines so many disciplines into one cohesive set. How did the elements align for the show to exist?

Boys Night is as much a clown show as it is a burlesque or circus show. We were working at the Floating Kabarette in Brooklyn, sitting backstage thinking there’ wasn’t a show of guys doing legitimate circus with the comedy and the burlesque. So Mr. Gorgeous, Jason, Joshua Dean and myself put on a show, it became a residency and we grew the show for four years. Now it’s a monthly residency at The Slipper Room every first Thursday.

You’ve worked with tours and shows and traveled with your acts. What about that has given you the most satisfaction?

The freedom to create our own stuff. It’s great to do shows with other people and be one of the cogs that makes that show or musical or opera special. It’s incredible and it’s what I wanted my entire life. But with Boys Night, I’m completely in control. I can let my imagination go completely wild and the only thing to tell me no is the audience response on whether it worked or not.

What happens when it doesn’t work?

Then you try again with something else. I keep pushing myself by adding new skills and more variety. I’m creating a repertoire where I have so many acts at my disposal that really work, I can pull one out and go anywhere.

What’s coming up for you next?

Besides Boys Night at The Slipper Room, my company, 2 Ring Circus, is going to be doing The Little Mermaid at Arkansas Rep, creating all the underwater sequences for that show. They came to us, not wanting to put people on wires, so we get to make that happen there and I’m really excited about it.

For more on Ben and his shows, check out 2 Ring Circus!