As performers who are working on stage and are passionate about promoting a culturally diverse and realistic representation of what America looks like, these artists are taking up the mantle off the stage as well.

Vocal powerhouse Angela Birchett made a name for herself playing Motormouth Maybelle in Hairspray touring around the country. Now she’s leading the band on Monday nights at Lights Out.

“Our show, Lights Out, is an open mic for the Broadway community to have a safe, free space to do what they don’t get to do eight times a week, so this type of conversation happens with our band and the people we invite to perform. We encourage people to take music from every genre and do what you will. As live music performers, we keep having the conversation about how we can make that safe place, almost like a playground where you can bring your own games, and do what you want to do. I’m excited because this allows us to complement the Broadway community and people of color within the Broadway community. We give you that safe place.”

That safe place on stage is something Kimberly Marable (The Lion King) has also fostered for herself in her cabaret show.

“For me it’s twofold,” she says. “Artistically, my most recent cabaret show is really geared to get people to care about something. There are protest songs, there are love songs, all sorts of music but it’s about something of substance. I think we as artists have to communicate and speak about things that matter. Also with Broadway Serves, we are getting people to give of themselves to the service of others and enrich the community and volunteer their times.”

“I was going to mention Broadway Serves,” Carole Jones (The Book of Mormon) said. Broadway Serves, the organization Marable helped found in 2012, was born out of the aftermath of the Trayvon Martin murder and was created for theatre professionals to be able to meet and take an active role in social issues. “You guys just had a great workshop with students. For me, I’ve started going back to the beginning, taking acting and dance classes, so I can feel confident enough to go to a student and explain how it is and how the industry works,” Jones said.

“Volunteering through organizations like Broadway Serves, I’ve worked with City Harvest and Village Care,” Genny Lis Padilla (On Your Feet) said. “Really on a basic level, it’s about being the best example I can be on stage and off. Making sure every time I go on stage, I’m giving the work justice. I have a responsibility, not only to the show and myself, but to my community to be the example for the next generation.” 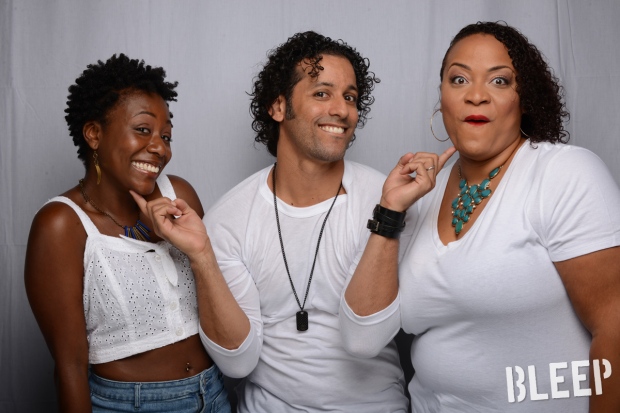 Michael James Scott (Something Rotten) is also interested in bringing that industry knowledge to students who wouldn’t otherwise get training from Broadway talent.

“I’m from Orlando and we are creating this organization called Broadway by the Beach,” Scott said. “To be able to have those kids in the area where I grew up have a program and a place where I can bring performers from Broadway down to the beach is something we’re really excited about. Finally, I can do something and give back to the people who cheered me on for so long.”

Another organization utilizing the arts through educational and collaborative programming is R.Evolución Latina. Focusing on empowering the Latino community, founder Luis Salgado (On Your Feet) remains committed to making a difference through the arts.

“It’s about action,” he explains. “Educating, empowering, and nurturing. Thanks to In The Heights, we have been able to affect so many lives. We just had our summer camp that has over 250 kids every year, coming to take free acting and singing and dancing classes from Broadway talent who are donating their time to empower these young people.”