After spending time on the road in The Book of Mormon and opening Disney’s Aladdin on Broadway, Marisha Wallace is currently lighting up the stage in the hit musical, Something Rotten. In a show stuffed full of stand-out, hilariously inventive moments, hers may take the cake belting a Dreamgirls classic while dressed as a dancing egg. No question about it: Marisha Wallace is a scene-stealer and a showstopper.

Something Rotten is a nonstop adventure ride full of giant production numbers and tap dancing around every corner. How do you build up the stamina for such a physically demanding show?

It’s crazy because I didn’t tap before Aladdin. That was my first time I’d ever tapped on stage. Then I did Something Rotten. Casey (Nicholaw) said ‘Oh this will be fun. It’s just a couple tap numbers.’ Then I got into it and it’s a lot. A lot of tap, a lot of energy, and it’s a high octane show. On top of that, you’re doing it in Elizabethan costumes with many layers, a bum-roll, and corsets. It’s full on. Once you build the stamina up though, you can get through it.

What are you loving about Something Rotten right now?

I just love the audience’s reaction to the show. It’s definitely a love letter to people in the theater and to people who love Broadway and love Shakespeare. On the other side, the show is funny even if you don’t know the musical references. What’s happening on stage is just funny.

Also, I’m getting to work with these amazing actors who I’ve looked up to and who are now my peers. We’re on stage together. It’s kinda crazy because I’ve listened to Brian D’Arcy James’ voice all the time, and now he’s my friend. These people, they’re so fearless on stage, especially with their comedy and they’re willing to take a chance. When you take that chance, sometimes it lands, sometimes it doesn’t, but being around people who are not afraid makes me better on stage.

You have a couple gospel belting moments in the show.

It’s stretched me vocally because I have to use so many parts of my voice, then dance and sing and jump around. I’m singing high belt, then dancing around, and then tapping. I never thought I would be able to tap in a show, let alone tap at an audition and now I feel so comfortable being able to say I can pick that up or learn a tap routine. I’m so much more confident as an actor.

When did you realize you had a hit on your hands?

I’ve been with the show for a long time. I did the reading as well as the lab and now Broadway. When we did the reading, everyone was laughing so loud. So many people from the Broadway community came to watch the reading and people loved it. I did The Book of Mormon and I remember when I first did that, I knew the show was going to change everything. This show came along, and it was kinda the same thing. I knew it was really funny, clever, smart, well-written and it’s so catchy. Rhyming penis with genius…is kinda genius.

What else are you working on?

I just worked on the prom musical with Casey. That’s the working title, it’ll end up being called something different. I’ve been pulling a lot of double duty, working on readings of other shows at the same time. I did the short, “Frozen Fever.” That was my first animated film I’ve sung on. I was a townsperson and I sang backups on the song Idina Menzel sang. I’m also working on my own music and putting together a solo show soon, so stay tuned.

Check out Marisha in Something Rotten on Broadway this fall! 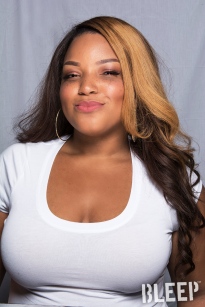