Luis Salgado’s career has taken him from shows like Women on the Verge of A Nervous Breakdown to films like “Step Up 2 the Streets,” and “American Gangster.” But it was In The Heights that opened up an opportunity to give back to a community in need of the arts.

You’re back on Broadway! After working on so many shows, what do you love about the process?

This is my fourth original Broadway show, On Your Feet, and I’m very proud of the original part. As I learn the ropes of this business I love, it’s wonderful and such a luxury to be able to develop something new and be a part of the creating process. Being in the room with talented people like Sergio Trujillo, Andy Blankenbuehler and Jerry Mitchell as they are creating something, to me, is an adventure. In my experience, it’s been so much more rewarding than when I’m expected to do something that’s already been created.

As On Your Feet hits New York, what are you excited about beyond getting to perform on Broadway again?

For me, there are two different things that are imperative when it comes to this show. One, it’s my history. Not just culturally, but speaking about my career as well. When I came to New York City, my first Broadway show was meant to be Mambo Kings, and that show didn’t make it. It was a hard time and I remember reading on one of the Broadway sites, something like “the show is full of Latinos, it will never make it to Broadway.” Ten years later, it’s being embraced. In The Heights opened a giant door and that door has multiplied. You no longer have to come out on the stage with a gun in your hand or with cocaine in your pocket as a Latino character. On Your Feet Is another opportunity for so many Latinos to be proud and for the world to understand this story of acceptance and cultural awareness. I’m a part of art that contributes to our society and I’m so proud of that. 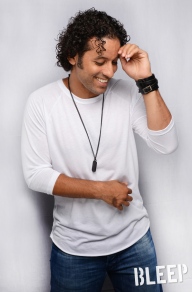 How has the scope of what you do as a performer expanded since you began performing?

During my time with In The Heights, my organization R.Evolución Latina was born. Inspirations of Priscilla Lopez, Lin Manuel Miranda and all of the Latinos who are such an example, we saw that at the time, our community didn’t know anything about them. Celebrating their stories was imperative. During the show, I could utilize my days to get the organization to where it is today, which is now supported by Broadway Cares Equity Fights AIDS and affects hundreds and hundreds of people a year. We bring arts to our kids. The thing that disappears fastest in public schools is the arts so for the past eight years, we’ve been bringing it to them.

It’s expanded even more since that point too hasn’t it?

It has! Because of working with R.Evolución Latina, I learned there was another generation of Latinos who are looking for opportunity to develop as writers and performers. I knew there needed to be a Latino production company to help provide them with opportunities. Salgado Productions has now been able to develop work internationally in Columbia, Peru and Mexico. It’s not limited to just Latinos, but it’s about enabling the next generation of people to tell their diverse stories.