Though many may turn to a cooler of beer when the mercury rises, there are a multitude of classic summer cocktails that shouldn’t be neglected. Old standbys like the gin and tonic and margarita are perfect on their own, but both are immensely adaptable. I have mentioned pairing floral liquors like Crème de Violette with gin before and adding one to a G&T is never a mistake, likewise margaritas can be imbued with some sweeter notes by adding in a variety of liquors. If you have a sweet tooth give the G&T’s lesser known cousin, the Tom Collins, a try, or if you grow tired of tequila try your margarita with a more complex and flavorful mescal instead.

If it can be said that there is a best time for day drinking it is most certainly the summer. Long bright days lend themselves well to hanging out with friends on a patio letting time slip past and drinks slip down. As such I have concocted a trio of cocktails appropriate for any hour, hell, one could practically be a breakfast smoothie. So whether you’re looking for a prismatic punch, an over-proofed slushy, or some sweet tea grandma might not approve of here’s your fix.

The summer months can be a blast, so have fun, and stay hydrated, both with water and otherwise, and as always drink smart, and drink well. 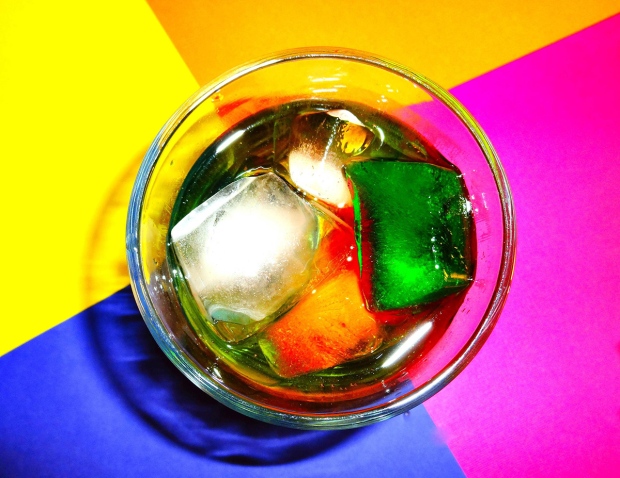 The given all the pride events of the summer, bright rainbow colors are certainly in order, however, allow me to save you a lesson too many have to learn the hard way: Layered ‘Rainbow’ shots taste terrible. Layering shots is the process of floating liquors of varying specific gravities on top of each other, and some of them do in fact look very impressive while still tasting good, like an Irish Flag or a Buttery Nipple. The trouble arises when you try to layer five or more colors: there just aren’t enough colorful liquors that taste good together.

This is my compromise for a situation in which you might want a very colorful drink, which people will actually consume. The drink itself is a fairly simple one, meant to be approachable and light. The, admittedly purely aesthetic, colored ice cubes are made simply by adding food dye to water in an ice cube tray. In order to keep the drink from turning a shade of brown in moments the dye should be added to the  trays after the water has already begun to freeze; the cubes freeze from the outside in so doing this leaves a layer of clear ice on the outside protecting the clarity of the drink, at least for a time.

Fill a tall clear glass with colored ice cubes. Combine vodka, rum and triple sec in a shaker or glass and chill, pour over the ice and top off with lemon-lime soda.

Iced tea and summer go hand in hand, which is great considering it is also a fantastic, and underutilized mixer. This cocktail uses fresh brewed Earl Grey tea, and while a different black tea would likely be comparable, Earl Grey is great as a mixer or as plain iced tea; the hint of bergamot gives it some depth that some teas lack when chilled. On a related note, no matter what type of tea is used be sure not to brew it too long – cold temperatures can heighten bitter tastes.

The rye and honey give this drink a mellow tone making it great to sip on a hot summer afternoon or at the onset of a cooling evening. The cranberry juice could be substituted for a splash of lemonade, a squeeze of lime, or some other acidic component, it’s a flexible drink, make it your own.

Add the honey to the tea while still warm to dissolve, allow the mixture to cool then combine with the other ingredients in a shaker full of ice, shake and strain into a glass with additional ice. 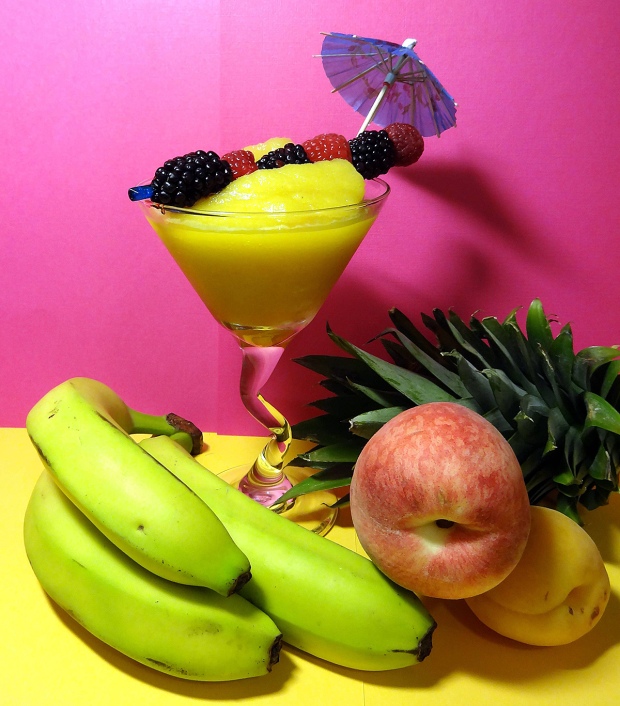 Frozen drinks often carry the reputation of being diabetes inducing sugar bombs sipped by vacationing sorority girls and Hawaiian print shirted dads, but this by no means has to be the case. Many mixes used to make frozen drinks are indeed full of sugar, but by forgoing sugars for naturally sweet fruits you can achieve a drink with a balanced taste and creamy texture.

Flavors in especially cold drinks can be muted, which is why a variety of rums are used in this drink, the Jamaican rum especially has a rich and pronounced flavor. The Elderflower rum is more subtle but adds some dimensionality, if it can’t be found, an equal amount of St. Germain can substituted to attain a similar taste, while falernum syrup could be replaced by a pinch of allspice, it is a great item to have in your bar and this is a weak substitution. Falernum is a syrup which can be spiced in a number of ways, but typically has notes the like of allspice, cloves, and vanilla; it pairs well with rum, making it a great addition to many tropical drinks like Mai Tais or Zombies.

Combine all ingredients in a blender and liquefy, adding ice to achieve desired consistency. Garnish with fruit as desired.