Time for the perfect Thai brunch

I live for Sunday Brunch, when the champagne pops, the bacon simmers, and friends gather to reflect on the quality of their weekend decision-making.  It’s that final celebration of autonomy and self-expression before the reality of Monday morning meetings, cheap coffee, and way too many pleats sets in.

Compounding my brunch affinity is a pretty serious obsession with Southeast Asian food which controls most of my eating habits.  Even as I write this for you, I’m enjoying a steaming bowl of noodles in beef broth, gigantic shrimp dumplings, and coffee swimming in sweet condensed milk…at 9:00 in the morning.  The implication here is profound when brunch rolls around:  While you may order eggs benedict with golden hollandaise and a side of hash, I want that savory, herb-bombed, fresh veggie wonderfulness so synonymous with the Southeast Asian peninsula. 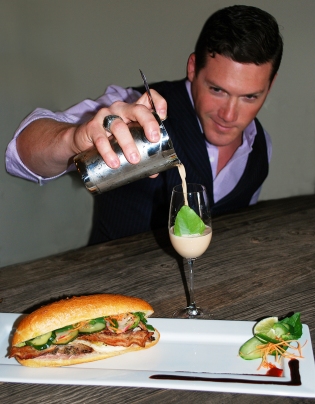 Vietnamese food is, generally, and artful assembly of fresh ingredients that satisfy all ranges of your taste buds.   The country was a part of the French colonial empire for decades, and all that traditional franc epicurean excellence remains a key part of Vietnamese culture.  Think crusty, flaky baguette combined with umami knockout punches like savory pork sausage and that awesome bitterness that comes from fresh basil and mint.   It’s everything you’d want for Sunday Funday Brunch: carbs, pork, more pork, and some endorphin-raising heat.  And it’s hard to find a better example of this blissful marriage than in the quintessential Saigon street food, the Banh Mi.

While the term Banh Mi simply means “bread,” it has become synonymous with the stuffed, hoagie-style sandwich.  Its unique texture and flavor lies in the country’s history; since the Ho Chi Minh ousted the French and led the country to independence, the baking style morphed.  Rice flour began to replace much of the wheat, and the Vietnamese baguette, the Banh Mi, assumed its present lighter, flakier state.  As you walk the streets of Saigon, the smells of its many ingredients (frankly, you can put whatever you want on one and it counts) fills your nose.  The key to its amazing taste lies in the balance between the flavors.

The (disputed) best Banh Mi in Ho Chi Minh City boasts 9 different types of pork products including pate, something called pork floss, sausages, and cold cuts.  This undertaking for brunch is simply exhausting, and I am not about to write about making pork floss.  However, we can treat our Brunch Banh Mi in the way it was intended by sandwiching all of our favorite ingredients into one eye popping bite.

A final note on condiments:  Hoisin and Siracha (think BBQ sauce and ketchup, respectively).   It’s best to keep these on the side. 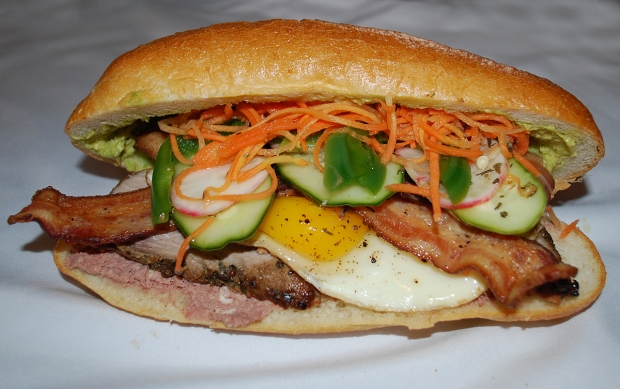 Don’t forget the cocktails; it’s Sunday Funday, after all.  Let’s hop to the other side of the Malaysian peninsula for a twist on the Thai Tea.

Shake heavily over ice and garnish with Kaffir Lime leaf