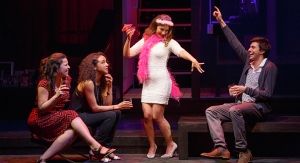 There’s a lot of theatre in New York clamoring for our attention, especially in the weeks after the Tonys. Some shows want to transport you to another world, some want to remind you of a bygone era and some solely want the audience to be entertained. But then there are the shows that aim at something higher: to speak to the truth. Significant Other, currently playing at The Laura Pels Theatre, is one of those shows.

I’d read a small blurb about the show and was in the mood to see something that wasn’t a mega-musical. What I didn’t know is just how much of myself I would see up on that stage. And I’m not alone.

Whenever Marta Kauffman, one of the co-creators of “Friends,” is asked about the potential for a reunion of the hit show, she has answered that a reunion wouldn’t make sense because that show was about a time in those characters’ lives when your friends are your family. Once they began getting married and having kids, the dynamic changed, just as it does in real life. Playwright Joshua Harmon brings that truth into 2015 and grounds his very funny play in a very stark reality for so many men.

This isn’t a coming out story, we’ve seen that too many times. This is a story about a man who wants to share his life with someone else, be that his friends or a husband-to-be. It gives voice to the many single guys and gals in their late twenties and early thirties who find themselves wanting the same thing, especially in New York where meeting someone is notoriously difficult. I’ll add that it’s also a rare story of a gay male who isn’t focused on quick hookups while en route to finding what he truly desires, love.

As the lead, Gideon Glick is a force to be reckoned with. Not only does he hardly ever leave the stage, but he never loses your attention. His character, Jordan Berman, may be an overly eager, fairly neurotic, late-twenty-something who gravitates toward spiraling rather than rationality, but the core of the character resonates with even the most level-headed audience member. He loves his girlfriends, they are his life, and he sees his life changing as the calls become less frequent and talk turns from boys to babies. There are so many “Jordans” who are experiencing this same moment today, and Glick gives voice to all of them.

When big budget theatre has something to say beyond “come see this TV star” or “come see the musical version of this old movie,” I think we have to give it the credit that’s due. With such a great production, a bad ass set by Mark Wendland and one of the best performances of the year by Glick, this is a show that deserves to be seen by as many “Jordans” as possible.

I’ll be going back to see this show again. I hope you’ll join me.

Significant Other is playing through August 16 at The Laura Pels Theatre, 111 West 46th Street. Get your tickets at www.roundabouttheatre.org

As a rule, BLEEP does not “review” shows or concerts. We adhere to the adage “if you can’t say anything nice, don’t say anything at all.” We exist to build up artists, not tear down the art. This is an op-ed endorsement.