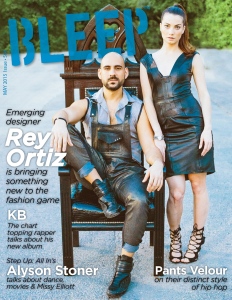 The new issue of BLEEP has landed and we are beyond thrilled to have designer Rey Ortiz featured on our cover. As a boy, Rey Ortiz was enamored with creating his own illustrations and he drew nonstop. Today, he’s taking what he used to merely draw on paper, and turning it into the fashions worn by the likes of Bianca Del Rio. We talked with the emerging Puerto Rican designer about his passion for clothes, his inspirations as an artist and why you have to create for the love of the craft.

You may remember Alyson Stoner as the little girl in Missy Elliott’s music videos and in movies like “Cheaper By The Dozen.” Now, she’s starring in films like the “Step Up” movies, has a new single and recently had a viral hit on YouTube in tribute to those Missy videos. We caught up with Alyson about what she’s up to and the state of the dance industry.

We are also thrilled to have KB in the May issue. In his career so far, the rapper has won a Dove Award for “Rap/Hip-Hop Song of the Year,” a No. 1 spot on Billboard’s Christian Album Chart and No. 4 on Billboard’s Rap Chart.  For his newest album, “Tomorrow We Live,” he spent time in Capetown, South Africa to develop his new crop of dynamic hip hop tracks. Not afraid to talk about real-life issues such as suicide, family, love, and society’s look on women, we talk about what he’s bringing to the genre.

Head over to check out the issue and all of the other artists inside as well.