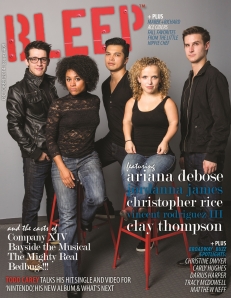 We are thrilled to announce the lineup for the annual Broadway issue of BLEEP Magazine. Each year, critics and columnists write a lot about the “current state of Broadway” and what direction they believe the art form should be heading, but we decided to go straight to the source. BLEEP Editor Ryan Brinson talks with Ariana DeBose (Bring It On, Motown The Musical, Pippin), Jordanna James (Sideshow), Christopher Rice (The Book of Mormon), Vincent Rodriguez III (Here Lies Love, The Hunchback of Notre Dame) and Clay Thompson (Newsies, Matilda) about diversity on stage, movies turning into stage productions, stunt casting and their hopes for the future.

Other artists in the issue include pop sensation Todd Carey, whose single “Nintendo” has become a viral hit, the newest clothing line from designers Marek+Richard, and composer Sean Beeson talks about scoring video games and films.