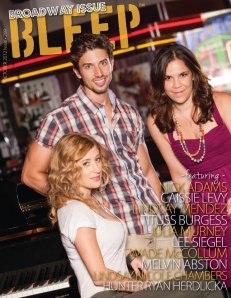 BLEEP’s big Broadway issue is here and it’s packed cover-to-cover with your favorite performers! Featuring Caissie Levy (Ghost), Nick Adams (Priscilla Queen of the Desert) and Lindsay Mendez (Godspell) shot by Kevin Thomas Garcia in the world-famous Birdland Jazz Club in New York City, this issue lets you in on how these performers got to Broadway and where they are headed next. We’ve got features on Julia Murney (Wicked), Tituss Burgess (The Little Mermaid, “30 Rock”), Hunter Ryan Herdlicka (A Little Night Music), Wade McCollum and Lindsay Nicole Chambers (Triassic Parq), Lee Siegel (Jesus Christ Superstar) and Melvin Abston (Sister Act).

But that’s not even it! We’re spotlighting Broadway Spotted, your go-to source for all Broadway fan information and we’re catching up with some of last year’s Broadway issue favs Brandon Rubendall (Anything Goes), Liz Froio (25th Annual Putnam County Spelling Bee), Renee Marino (Chaplin) and Kimberly Marable (The Book of Mormon).

BUT – even that’s not enough! It’s October which means it’s fall. We review “Mutated,” a not-so-typical zombie book AND chat with the author himself as well as giving you the recipes for the cocktails that will take your fall gatherings up a notch.

This is a huge issue and we are thrilled to share it with you! Click HERE to check it out!