BLEEP Magazine has been quite the adventure. It’s been 8 exciting years full of some of the most talented artists in the world—musicians and actors and dancers and creators of all types—who have shared their hearts and stories with readers in more than 175 countries. As much as I’ve been the man behind the features, making them into what’s been published over the years, there have been many wonderful and insanely-talented photographers who have brought those features to life. But of those many, there are two people in particular without whom BLEEP never would’ve made it. Those men are Kevin Thomas Garcia and Christopher Boudewyns.

Without these two men, there would be no BLEEP. Yes, we’ve had some amazing shoots that have captured some really stunning moments, but it’s their friendship that has meant the most to me. To them, I will be eternally thankful and it’s for that reason, they get the last words from BLEEP Magazine.

Thank you Kevin and Chris. You’re the reason this little experiment I drummed up eight years ago not only worked but became a magic little corner on the internet where positivity reigned and artists could inspire people all around the world. You’re brilliant and I’m honored to have been witness to two artists creating vibrant and compelling work. I love you both. 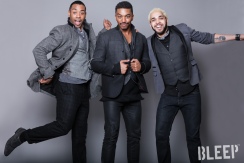 Chris and I have collaborated on almost every digital feature from the past few years and without his eye, his excitement to try new things, and his passion for capturing unique moments, the shoots would’ve been just head shot sessions with interviews attached.

I know you’ve been doing this for a long time, but when did you fall in love with photography?

I’ve always taken pictures. My mother was an avid amateur photographer so I’ve always had it in my life in terms of documenting life’s moments. When Harper was born, I stayed home to raise her but when she was going into Kindergarten, I needed to do something. I have a Masters in teaching but I really didn’t want to do that anymore. I had a nice camera so I started taking headshots of friends and I felt like I had a good natural sense of how to go about it. The technical aspects of it were more challenging so I took a bunch of classes at ICP [International Center of Photography School] and I just lunged into being a photographer.

Has it been 3 years?

And yes, I feel like it’s been a collaboration between the days doing the shoots to the edits to get them published.

I remember the first time I really became aware of BLEEP as a publication was when Klea Blackhurst was on the cover with Jim Caruso, Billy Stritch, Julie Halston and Natalie Douglas. I was mesmerized by that photo taken by Bill Westmoreland. I started reading BLEEP and knew I wanted to establish myself as a person who has opportunities to take photos like the ones Bill was taking.

When I reached out to you, your response was so kind. You said, “I’ve thoroughly stalked your social media and I like your style. Let’s make it happen.” You have such a nice group of people you’re connected to and the publication is so well respected among the theatre community. You’ve had opportunities to talk with some really phenomenal people which has turned out to be a blessing to me because I’ve been able to photograph those people. You afforded me some spectacular opportunities and that’s something for which I’ll always be grateful.

You’re far too kind. This is about you! You love taking pictures. You light up like a flashbulb during a shoot. What about photography makes you so happy?

It’s sort of like I’m still amazed when I take a picture and it comes out great. When the exposure is right, the lighting is right, and I catch a good moment in terms of expression. Then, seeing people’s faces when they see images of themselves and like them—it’s such a rush to me. It’s capturing a moment in time; a moment or expression that’s magic. That’s just thrilling to me.

To book Chris, head over to www.christopherboudewyns.com

Kevin became part of BLEEP when he leaned over a bar top and shouted above the noise, “Hey! You have a magazine? Why haven’t you asked me to shoot for you yet?” So I did and over the span of four years, he shot more covers than any other photographer. He has a knack for capturing a person’s spirit in his photos, up close and personal, and that’s why he’s as good as he is and why he’s as admired as well. 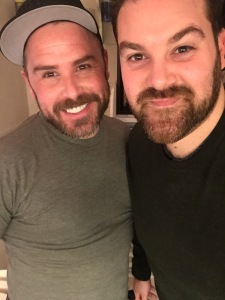 Life for you is very different than the last time we worked together. You’ve changed careers entirely and are now the Hair Supervisor at Anastasia on Broadway.

I worked at Kinky Boots fulltime for two years and joined Anastasia in July. I’m responsible for everything hair and makeup related for this production. It’s weird, I thought about going to go to school for this when I was younger and just kinda forgot.

And you did went the performing route instead?

Well, I was always a performer but I honestly didn’t know this was a career. When I was on tour with Mamma Mia, I was always in the hair room, but even then, I didn’t think to do it as a career because I’d begun taking pictures. I started taking headshots on tour because I saw the pictures people would bring in and knew they could be better. I felt like I was good at getting the shots because I’m an actor too so I knew what they wanted. From there, I didn’t stop. Having said that, after many years, I needed a change. I don’t mind the hustle, but with photography, you’re never done. There’s always a deadline, always another email to send or respond to, and another edit that has to be made. I still love taking photos but felt I needed a switch.

And that switch for you meant going to hair school.

Yes. I was also working at Kinky Boots while I was in school. I’d get to school at 9 a.m., be there all day, get to Kinky Boots at 5 p.m. for the show that night, and I’d be there until 11. I did that every day.

Though you’re not doing it fulltime, you’re still actively taking pictures of people. What’s your favorite part of being a photographer?

Getting to meet all the cool people. It’s interesting, when I was younger, I just wanted to be important. As I get older, that’s less important to me. For instance, if I do my job here correctly, most people wouldn’t even know I had a job. It’s different at Anastasia because they’re all in period hairstyles so clearly they’re wigs, but at Kinky Boots, part of the fun was when people didn’t know the actors wore a wig. If you’re doing realistic styling, it’s not supposed to look perfect so when I’d hear someone say, “Oh, the factory women were wearing wigs? I had no idea,” I take pride in that. It’s not about me being known or important. It’s about putting on a show.

We worked together on features for four years. Is there a specific memory that comes to mind from all of the time in which we collaborated?

Birdland. It was you, me, Caissie Levy, Lindsay Mendez and Nick Adams and I really enjoyed that. We all knew each other from different things and it was cool to catch up and do something like that together at a place like Birdland.

Not to imply you weren’t happy before, but now that you’ve shifted careers, are you happy?

I am. I didn’t struggle that much as a photographer but there’s something nice about being able to clock out. I also get to make my leading ladies feel special, which I love. I thrive on that. I get to do everyone’s pin curls and it’s our time to catch up. The banter back and forth, especially with the Dowagers, is really fun. It’s cool and makes me feel included in a way I wasn’t included as a photographer. I’m really happy.

To book Kevin, head over to www.ktgnyc.com

All of the BLEEP Magazine covers shot by Kevin Thomas Garcia