Given the harshness of this past winter, few await the onset of summer with anything less than excitement. I have done my best to capture the warmth in a selection of drinks. Included are an herbaceous martini, a bright spin on an uncommon classic cocktail, and a tropical drink that is unashamedly summer.

This selection also gives a good chance to make infusions or bitters for those with a do-it-yourself streak. While there is one well-regarded, commercially-produced cucumber vodka available – Effen – it is simple to make at home given a day or two: just peel a cucumber and cut half of it into thin slices or chunks, and combine with two cups of vodka in a sealable container. Allowed to rest for roughly two days, the resulting infusion should have a clean vegetable taste – too much longer than this and it can become bitter. Likewise, celery bitters can be made at home, though admittedly that’s a bit more complex, and Bittermens makes a fine product.

Many years ago a friend challenged me to make a cocktail using cucumber. The opportunity to attempt something didn’t arise at the time but recently the idea reoccurred to me and this time I didn’t let it go. Cucumber is an odd ingredient for a cocktail as it isn’t a particularly potent flavor – it doesn’t bring a sweetness or tartness into the mix like citrus would, nor does it add much complexity like more medicinal infusions (such as licorice) might. With this in mind, most strong flavors would likely over-power the cucumber taste sought, so this is a very clean and crisp martini.

The mint leaves are only mixed in briefly to add just a slight hint of mint, which can be a strong flavor in any case and would easily dominate the cucumber otherwise. The bitters round the drink out and insure that there is some depth and richness. This drink would be best consumed with a meal, especially one that included dark meats to act in counterpoint to its relative lightness.

Combine Cucumber Vodka and lemon juice in a shaker with a generous amount of ice, add mint leaves and shake vigorously. Add Celery Bitters to shaker and shake again before straining into a martini glass. 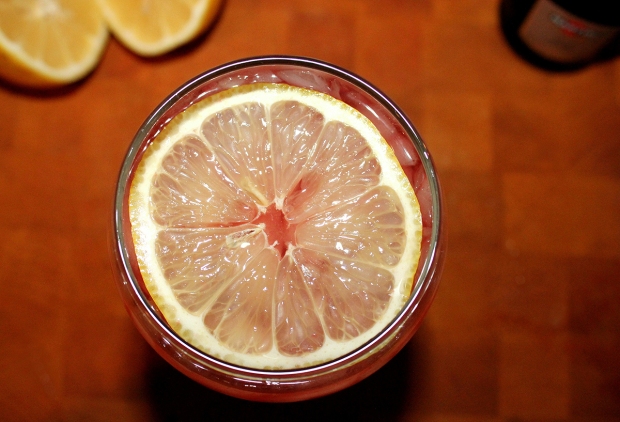 The Daisy is a classic cocktail that hasn’t seen the revival many others have, and that may be due to its relation to more popular drinks like the Cosmopolitan or Sidecar. In its simplest form it contains a base liquor – most traditionally brandy – combined with citrus and poured over crushed ice, with variants adding different fruits and liqueurs.

The Daisy presented here is fairly simple and is ripe for experimentation, the only major departure from tradition being the use of sparkling wine, which adds effervescence and smooths the harshness associated with some brandies. Different fruits could be added and in ways this drink could be treated like an enhanced Sangria – brandy being distilled wine. The amounts of sparkling wine and grenadine can be varied to produce a sweeter or drier drink to suit individual tastes.

The Mai Tai is among the archetypal island drinks, along with the likes of Daiquiris and Blue Hawaiians, and as such exists in countless variations. Key limes are not often used in drinks, likely because they are harder to juice and are less familiar than others, but with bit of persistence they can yield a fair amount of juice that plays well with certain sweeter ingredients.

This rendition is likely more tart than many others, forgoing the traditional use of curacao and reducing the amount of Orgeat syrup. Key limes are also tarter than more common varieties of limes and add a slight bitterness to the drink. The cranberry bitters were included by happy accident, and while they are not required, they contribute an unexpected zest to the final mixture.

Combine Light Rum, Key Lime Juice, Triple Sec, Orgeat Syrup in a shaker with ice, shake and pour into a tall glass, pour an ounce or more of dark rum gently on top.